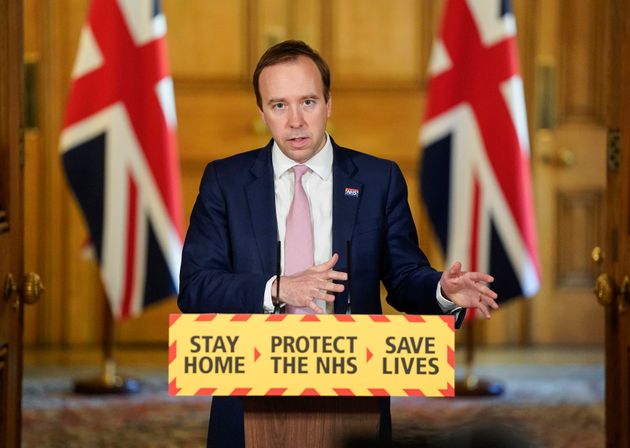 You’re reading The Waugh Zone, our daily politics briefing. Sign up now to get it by email in the evening.

There was a moment in the No.10 press conference today that underlined the power and the pitfalls of the government’s coronavirus strategy.

Matt Hancock revealed, almost in passing, that in fact the UK’s testing capacity now stood at 108,000 a day. Yet within seconds critics were pointing out that the figure jarred with the 122,000 tests figure published last week that allowed the health secretary to surpass his totemic 100k target. Unsurprisingly, the practice of counting those swabs simply posted out (but not returned) was again questioned.

But Hancock’s target aside, it’s worth pointing out just how enormous that 108k figure is. Deputy chief medical officer Jonathan Van Tam added that “there is another lab opening next week”, which suggests another 20,000 a day capacity on top. That would put the UK alongside, or even ahead of, Germany, with a capacity to conduct nearly a million tests a week.

Getting that testing rate up is obviously crucial to Hancock’s ‘test, track, trace’ (known as ‘TTT’ to some insiders) policy. The other key planks of the strategy are the new NHS smartphone app, due to go live on the Isle of Wight from Tuesday, as well as the 18,000 human contact tracers needed to roll out the scheme nationwide.

But the timing of that national rollout, and the lifting of the lockdown, no longer appear directly linked. Many have assumed in recent weeks that it’s only once the number of new Covid-19 cases is very low that ministers would feel confident enough to start the tracing policy that worked so stunningly well in South Korea.

And in perhaps the most interesting bit of the No.10 briefing, Hancock was at pains to deny any direct link between easing the lockdown and getting his TTT fully in place. “We haven’t said we can’t make changes before it is up and running. It is just that the test, track and trace system will help us get R [the reproduction number] down and the lower the number of new cases, the more effective it will be.”

Hancock, having won some crucial early battles in Cabinet for a cautious approach, sounded very much aware of the economic pressures to reopen some workplaces and relax the rules as far as the scientific advice will allow. So while the lower the new cases the better for his plan, it doesn’t sound like he’s hammering on the PM’s door to insist that figure is in the hundreds rather than thousands. In fact, the Isle of Wight pilot seems like a ‘proof of concept’ that is being relied on across government to avoid the wait for all 18.000 contract tracers to be ready in place nationwide (something that will take weeks I’m told).

Even as Hancock was speaking, another factor in the 3-D chess puzzle of the fight against Covid-19 was on display in the Commons. Tory grandees Sir Graham Brady and Steve Baker got up to warn of the draconian nature of the lockdown so far. “If anything in some instances it may be the public has been a little bit too willing to stay at home,” Brady said.‌

On the day the TUC warned against bosses forcing staff back to work without adequate protection, it’s worth quoting Brady in full: ”I’m sure I’m not the only member who has heard from employers struggling to fulfill orders because it’s difficult to get employees back for furlough. And I think we all know how critically important it is that they ought to be able to get their workers back so we can make sure those jobs remain when the furlough period ends.”

Just as importantly, chancellor Rishi Sunak sounded more than a little impatient in his own interview with ITV in which he set out why he would be tapering his furlough scheme. “We are potentially spending as much on the furlough scheme as we do on the NHS for example. Now clearly that is not a sustainable situation.”‌

Still, Hancock has ‘caution credit’ in the bank with No.10, not least given the PM’s own experience of the disease. And one thing the cabinet is totally united on (despite some colleagues sniping at his 100k tests target) is the need to get a vaccine as the long term solution to the pandemic, globally and domestically.‌

With the anti-vaxxer movement growing around the world in recent years (hell even Robert de Niro was at it), it’s not enough to just find a vaccine, it’s crucial to win the comms battle to get people to get the jabs. Last year Hancock was so concerned about low uptakes of vaccines like MMR that he told me he was looking at making them compulsory in schools. Today, he said the public’s response to government messaging on Covid suggested no compulsion would be needed (though he added he would “rule nothing out”).‌

Let’s hope he’s right that there will be “enormous demand” for the new vaccine when it arrives. In the process, the government can restore the concept of ‘herd immunity’ that some had abused in the early stages of this pandemic in the UK. ‘Herd immunity’ doesn’t mean some mad plan for mass deaths. In vaccination, it means the exact opposite, a required percentage of vaccine take-up required to make the population safe. If enough people get the shots, even those with cancer and immuno-compromised conditions can be protected.‌

‘Get your jab, protect the NHS, save lives’ - maybe that will be the slogan a year from now. And if it helps the wider fight of scientific facts against dangerous conspiracy theories, that really will have been worth waiting for.

Quote Of The Day

Work and Pensions Secretary Therese Coffey praised the “hidden heroes” in her department after she revealed the DWP had processed 1.8m new claims for universal credit since mid-March

Rishi Sunak revealed that UK businesses have applied for 6.3 million workers to be furloughed since the start of the coronavirus outbreak.

Conor Burns resigned as a trade minister after a report found he used his position as an MP to intimidate a member of the public. In an exchange of letters, the PM thanked Burns for his time as a minister and as his PPS at the Foreign Office - but offered no hint of a return to government.

Members of the House of Lords will be able to claim a half-rate of £162 a day to take part in virtual proceedings, rather than their full allowance that assumed stays in London.

Each week, the HuffPost UK Politics team unpack the biggest stories from Westminster and beyond. Search for Commons People wherever you listen to podcasts and subscribe.