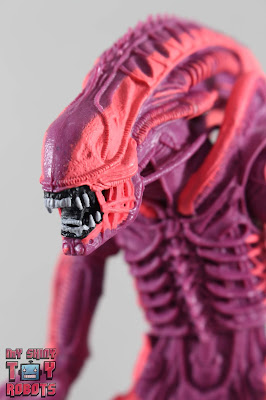 Release Date: 2017
RRP: $29.99
If there's one thing NECA know, it's how to do a good repaint. While the company has produced a range of high quality horror and sci-fi figures through their Ultimate line-up, another particularly popular faucet of their repertoire has been video game-themed figures based on characters' appearances in retro console or arcade games. These releases have included the likes of Godzilla, Batman, the Teenage Mutant Ninja Turtles and Freddy Kruger, but the Aliens franchise has proven particularly lucrative. Whether its through their own games or the Alien vs Predator crossover, people can't get enough of Xenomorphs and honestly who can blame them. The Xenomorph Warrior (Arcade Appearance) figure is based on the classic 1990 side-scrolling arcade game from Konami, in which the player could choose from either Ellen Ripley or Corporal Hicks. Here the Xenomorphs took on bright neon colour schemes, with the warriors looking particularly garish in their pink and purple cel-shaded glory. 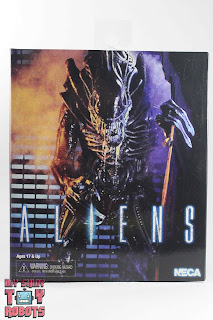 NECA's Ultimate Series packaging has always been top notch, and that high quality has definitely carried over to this release as well. Featuring artwork that mimics that of the actual arcade cabinet, the Xenomorph Warrior comes in a lavish window box that is worthy of display itself. The front of the box features an image from the movie itself, which is what was featured on the sides of the cabinet. The sides simply sport the Aliens logo, whilst the back features some great images of the figure showing off all its capabilities and accessories. The arcade screen backgrounds for each of the images look especially good and even if you've never played the game before you can see how well this garish Xenomorph blends into them. Open the box up and you have some more arcade graphics on the inside flap, and then a nice big window that shows off the figure and accessories. Opening it up you won't just find the contents on a moulded plastic tray either - there's also a backing card featuring level design artwork that's just perfect for display and/or photographs. 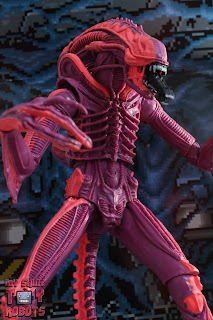 Though the sculpt itself may be identical to that of the Xenomorph's appearance in the 1986 film Aliens, the colours immediately make this feel like a very different figure altogether. Gone is that glossy black skin, replaced with an ensemble of hot pink and magenta. It's extremely vibrant, and immediately looks like something that jumped straight out of a retro video game. While these extremely bright colours may seem deterring to some, you only have to take a closer look at the figure to see some of the other advantages a brighter colour scheme can bring. The Xenomorph design is loaded with all manner of grotesque, skeletal and arguably phallic detailing - all of which is present on screen but much less pronounced when you're only dealing with one dark colour. With the arcade version's two-tone colouring all of that detailing suddenly gets so much more pronounced, with the additional black wash that's been added in certain areas bringing it out even more. It really lets you appreciate just how much of a horrific monstrosity the Xenomorph design is, even in hot pink. 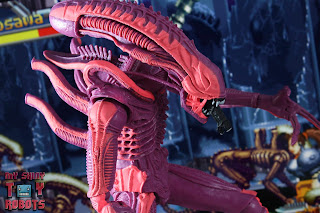 Upon further reading from Toyark's own review it seems that this figure isn't simply a straightforward repaint of previous Xenomorph Warrior figures, and actually a reworking that changes the sculpting and adds more articulation. While I can't imagine that mould then went unused on a new movie Xenomorph figure, it's always interesting when you hear of an obscure repaint coming first and then getting redone as the version everyone recognises. Regardless the articulation on this figure is excellent, with the Xenomorph able to get into plenty of monstrous poses. Altogether the figure sports a ball jointed head, hinged jaw with extending tongue, swivel hinge shoulders, upper elbow swivels, double hinged elbows, single hinge wrists and fingers, ball jointed waist, swivel hinge hips, knee swivels, double hinge knees, ankle rockers, hinged toe sections, a tail swivel and a wired bendable tail. While a wired tail might not the best when it comes to longevity if overly used it was definitely the best decision to go for here, since you can get a decent bend out of the tail straight of the bat without having to sacrifice the sculpt. Plus the swivel at the top is enough for the most part to sort out balance issues as well. The rest of the joints offer a wide variety of movement, and no joint seems overly stiff or poorly implemented. My previous experience with NECA has only been on their Chucky figures, which while nicely articulated are extremely small by comparison. The Xenomorph has nice long limbs so you can see the full extent of what the articulation can do, and the end result is extremely impressive for a figure at this price point. 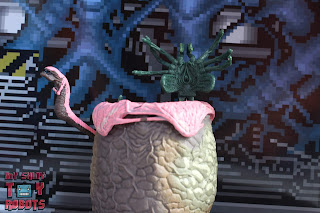 The Xenomorph Warrior doesn't come alone either! Also packaged with the figure are an alien egg, Facehugger and Chestburster - all refurbished from previous releases but given updated arcade appearance paint jobs. For the Chestburster this naturally means a pink colourscheme similar to that of the Xenomorph (with a bit more dark grey thrown in for good measure) but the Facehugger particularly stands out with its new green colours. As with the Xenomorph the 16-bit style shading has been beautifully done, using light and dark greens to bring out all that sculpted detail. The egg's colours on the other hand remain largely unchanged from the film version, though perhaps just a little more vibrant to gel better with all the other gaudy decos going on with this release. Both the Facehugger and Chestburster have bendable tails for very minimal poseability, and the egg itself is hollow on the inside so it's possible to display with the FaceHugger bursting out on an unsuspecting victim. These all feel like pretty essential accessories for any Alien release so seeing them included here isn't really much of a surprise, but to get a complete package decked out in video game colours really helps make the release feel particularly special. 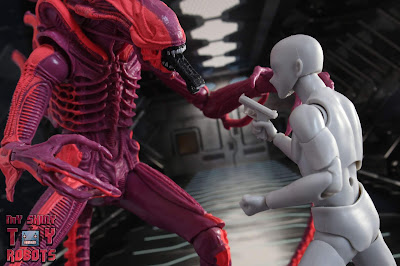 Though many toy collectors likely won't admit it repaints are often a necessity in toy manufacturing, but an inspired repaint can really show the breadth of imagination a company has and elevate them above all the others. NECA have found a brilliant niche with their video game tributes, and figures like the Xenomorph Warrior (Arcade Appearance) show why their possibly the best in the business when it comes to the repaint game. While this neon pink monstrosity undoubtedly won't be to everyone's tastes, the Xenomorph Warrior is a beautiful figure that not only perfectly captures the game sprite but also manages to bring out all that grotesque Xenomorph detailing in a way that the original colourscheme doesn't capture. Combine that with some great articulation, quality accessories AND an affordable price and you've got yourself a winner. Even if it isn't the Xenomorph you're after, take the time to check out some of the other figures NECA have in their video game range - they're the kind of repaints that really make the practice worthwhile.